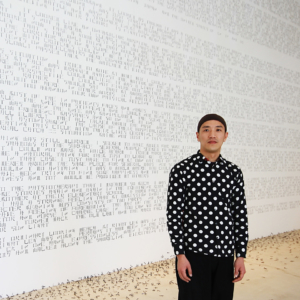 The puzzle in letters: this is what inspired Ryo Shimizu in his winning work, Altering Letters to find out, do letters divide or connect us?

Your project of altering letters earned you the artist of the year title at LICC in 2019. It is a very unique undertaking: strokes are taken out of Japanese writings in a gallery space so that they resemble other languages too. What is the idea behind that?

While letters create points of contact with others, they also have the hidden potential of dividing. I am interested in this ambiguity of letters.

In my project “altering letters,” the act of reading by the viewer is temporarily nullified by removing strokes from letters, and these letters can be reacknowledged as a different language again through the iteration of the acts of seeing and reading. The pictographs that the Sumerians in West Asia began using in the city of Uruk around 3200 BC are considered to be the origin of the first “letters” in human history. As if following in these footsteps, other character systems, such as the cuneiform characters of Mesopotamia and the hieroglyphs (picture writing) of Egypt, were developed around 3000 BC. It is believed that kanji characters were also substantially affected by the cuneiform characters, and kanji characters can be considered to contain supernatural elements (memories from the remote age of words preceding the creation of letters) that can be seen in cuneiform, picture writing, and pictographs. I am asking questions about the relationship between the acts of seeing and reading and the ambiguity of contact and division using the supernatural elements possessed by kanji characters.

I have been significantly impacted by the language environment of Japan, which is where I live. Japanese people can be considered a unique ethnic group that uses over 5 types of letters with different origins. These letters are kanji, hiragana, katakana, Arabic numerals, and the Latin alphabet. It can be thought that Japanese people borrowed kanji letters used by people from the Asian continent, who have had a strong influence on Japan since ancient times, since Japanese people did not originally have characters. However, kanji letters were adapted to coexist prosperously even after kanji letters were changed to create the unique hiragana system. This aspect can be considered unique and very representative of Japanese people.

What type of projects do you have and who are your typical clients?

Where can this art style develop, what directions are you planning to explore in the future?

Moving forward, I would like to develop my project in various places inside and outside Japan, with a focus on linguistic areas outside of the kanji cultural sphere. Additionally, I would like to research the relationships between letters and words, words and voices, and words and spaces to explore the possibility of new installations.

How did this recognition help you in your career?

I believe that my relationship of trust with existing clients has been strengthened. I have also received requests for projects from new clients. I hope that this recognition allows more people to know about my efforts and leads to the development of new projects.